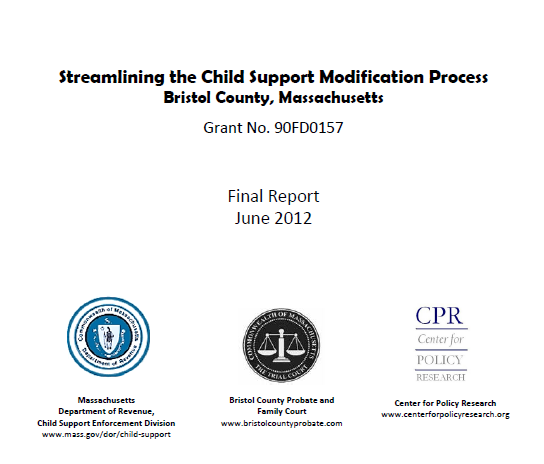 Responding to the Great Recession’s negative impact on the financial security of non‐custodial parents, the Massachusetts Department of Revenue (DOR) and the Massachusetts Probate and Family Court (the Court) set out to streamline the child support modification process.

“Developing and Testing a Streamlined Modification Process for Newly Unemployed Obligors”, Grant #90FD0157, supported efforts to accomplish this goal, and offered a valuable opportunity to design a pilot project and test a new approach to modification of child support orders. The adopted approach introduced three innovative features: (1) a simplified one‐page complaint combined with a motion for temporary orders, i.e., the complaint/motion; (2) an expedited scheduling process; and, (3) notice by first‐class mail instead of service by constable.

To assess the impact of these innovative features, information was extracted on a sample of modification cases filed in Bristol County before and after the introduction of the new approaches. Ultimately, case processing and outcome patterns were compared for 199 modification cases filed in 2009 (“pre‐pilot sample”) and 737 filed in May to December 2011 (“pilot cases”). The pilot procedures were limited to cases with medical and child support issues and excluded cases with custody, visitation and other issues that can be more complex and time consuming. To gather feedback on the new approaches, surveys were administered to stakeholders in DOR, the Court, the private bar, and litigants.

The analysis of data extracted on modification cases processed before and after the introduction of the pilot’s innovative forms and procedures shows that the new approaches tested in the pilot project succeeded in streamlining the modification process and that they were well received by parties and interested stakeholders.